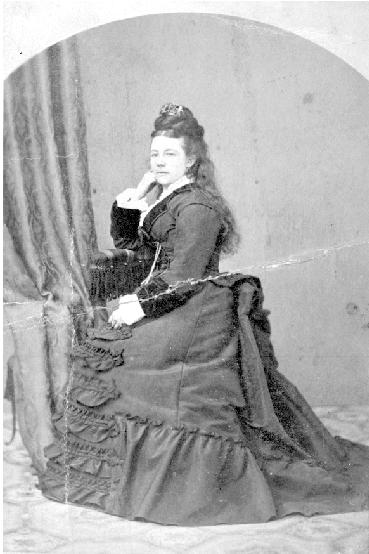 Margaret McMicking, nee Leighton, arrived in Victoria in 1864 with her mother and three brothers from San Francisco a ship called the S.S. Nevada(1). A fellow passenger, actress Julia Dean Haynes, may have inspired her for a life-long involvement with arts and music. Margaret first met her future husband, Robert in Lytton in her uncle’s office. Her uncle was involved in the telegraph industry as was Robert.(2) After an introduction and two and a half years of correspondence of “beautiful penmanship and lovely composition,” Robert wrote to Margaret’s mother in which he made his formal proposal for Margaret’s hand in marriage. Margaret would later recall, “It [was] a model of old-fashioned propriety, couched in the most dignified yet flowery language, and embellished with many flourishes and artistic capitals.” (3) After their marriage in 1869 and a brief stay in Yale, Margaret and her husband moved to Victoria.

Margaret McMicking was involved in many aspects of community life in Victoria. She helped create or was an integral member of the Local Council of Women, Friendly Help, the Victoria Literary Society, the King’s Daughters, the Burn’s Club, the Historical Society, the Alexandra Club, the Authors’ Club, the Navy League, and the International Order of the Daughters of the Empire. In addition she published a number of books. However, she derived much of her pleasure from the musical and theatrical scene of Victoria. Her disdain for the state of Victoria’s theatrical scene and moving pictures is evident in her comment, “I wish we could go back to the days of fine legitimate drama, instead of the silly, flimsy things we see now on the stage and in moving pictures.” (4)

Margaret’s dislike of moving pictures may be but one aspect of her fondness for the days of old Victoria. Her scrapbooks, written in the early 20th century are full of nostalgic memories of Victoria. Several articles and clippings in these scrapbooks relate to her involvement with St. Andrew’s Church which she obviously treasured along with markings of milestones in Robert McMicking‘s career as a telephone and electricity pioneer.