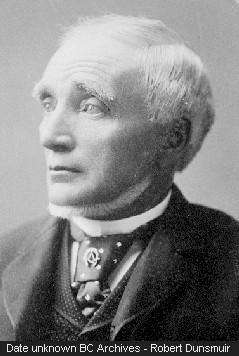 Robert Dunsmuir was born in Hurlford, Scotland and immigrated to Canada in the early 1850s. (3) Robert came from a family of coal masters, (4) so he began work in British Columbia for the Vancouver Coal Company until he discovered and founded his own coal mine in Wellington, British Columbia. (5)

As Robert’s coal mine grew successful, he moved from Nanaimo to Victoria. (6) Robert’s son, James, remained in Nanaimo to oversee the mining operation. (7) In San Francisco, another of Robert’s sons, Alexander, managed sales and shipping for the coal mine. (8) The Wellington coal mine expanded into business with rail and ships (which were used to transport the coal), collieries, an iron works, a saw mill, a quarry, a dyking company, a theatre, and extensive real estate. (9) Consequently, Robert became very wealthy and influential in British Columbia. Indeed, later in his life Robert became involved in politics and was a President of the Council for Nanaimo. (10)

Robert married Joan White from Kilmarnock, Scotland. (11) Robert and Joan had eleven children although one did not live beyond infancy. (12) The couple’s son Alexander Dunsmuir also died prematurely at the later age of 46 from complications of alcoholism, which was just six months after getting married to the woman he had lived with for nearly 20 years. (13)

Robert combined his real estate interests with his quarry business to build Victoria’s well known Craigdarroch Castle. (14) The Castle, Robert believed, would help marry his remaining three daughters. (15) Construction began on the Castle in 1887, but sadly Robert did not get to see the Castle to completion when he died in 1889. (16) Robert’s sons took on the task of completing the Castle and in 1890 Robert’s wife, unmarried daughters, and several grandchildren moved into the Castle. (17)

Robert’s importance to St. Andrew’s is illustrated by the large east window in the Church that is dedicated to his memory. (18) The Dunsmuirs were one of the five married couples listed on the first Communion Roll, but are not recorded as attending regularly. (19) Nonetheless, Robert was one of the Trustees of St. Andrew’s property (20) and a Church Manager for two years. (21)

Robert’s death in 1889 caused some conflicts to rise amongst Robert’s large family. (22) Robert had promised his business to his sons, James and Alexander, who had worked in the business for many years. (23) However, Robert’s Will stated the business and Estate be left to his wife. (24) The disagreement was brought to court, which reflected poorly on James who had become a British Columbia Premier by this time. (25) The argument continued with silence between mother and son until Joan’s death in 1908 when James with much indecision attended his mother’s funeral where he wept. (26)